Home
Places to Visit
Jabalpur
Best 11 Temples in Jabalpur You Must Visit in 2022
Post Views: 1,202

11 Temples in Jabalpur You Must Visit in 2022 | Jabalpur Mandir

Best 11 Temples in Jabalpur: Jabalpur is called Sanskardhani Jabalpur for a reason. The people here are into spirituality, religion. I see women going to temples every morning. Even the men and youngsters are not behind. Visiting temples is an integral part of our life. We not only worship God but also have a belief in its power. Temples in Jabalpur help us find peace in midst of all chaos.

in this article we will discuss temples near Jabalpur, Jabalpur temples you must visit Irrespective of Your Religion

Places to visit in Jabalpur city, Jabalpur is situated on the banks of holy river Narmada and is surrounded by rocky hills, hence it is also called the city of the rocks.” It got its name from Saint Jabali Pattanam or Jabal (in Arabic meaning rocks). It was the capital of the medieval Gond rulers but later it became the capital of the Kalchuri Kings and the Marathas until the British seized it.

Jabalpur is a holy place and there are many temples one can visit.

Here is a list of some must-visit temples of Madhya Pradesh, Jabalpur. 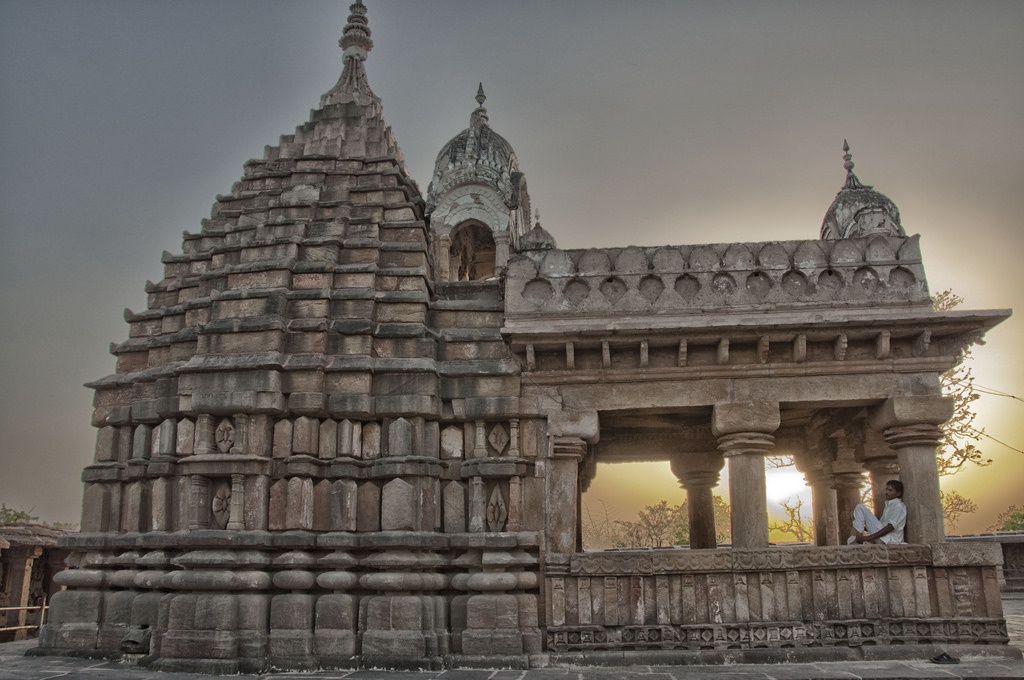 It is situated between bhedaghat and dhuadhar. Constructed on a hill, you have to climb some stairs to reach the temple. But it is definitely worth your sweat. Chousat Yogini is a temple of about 64 beautifully carved statues of Yoginis. Here, inside the main temple Lord Shiva & Parvati can be seen together riding on Nandi (bull). The main temple is encircled by 95 statues of yoginis. Plus, this temple offers you an electrifying view of the city. 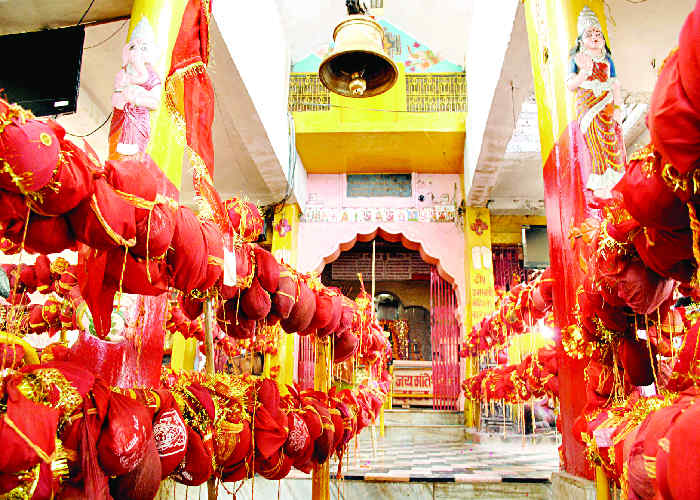 Tripur Sundari has located about 12 km from the city, on the bhedaghat road in the village Tewar. It was a sacred place during kalchuri dynasty and a place of worship since the 11th century and till today, it is worshipped by thousands of people. This temple welcomes people with an outstanding view on either side of the road and a colorful market. It is famous for the statue of goddesses (Devi) which emerged from the ground. There is devotion in the atmosphere and is a centre of attraction for many sages and pundits. 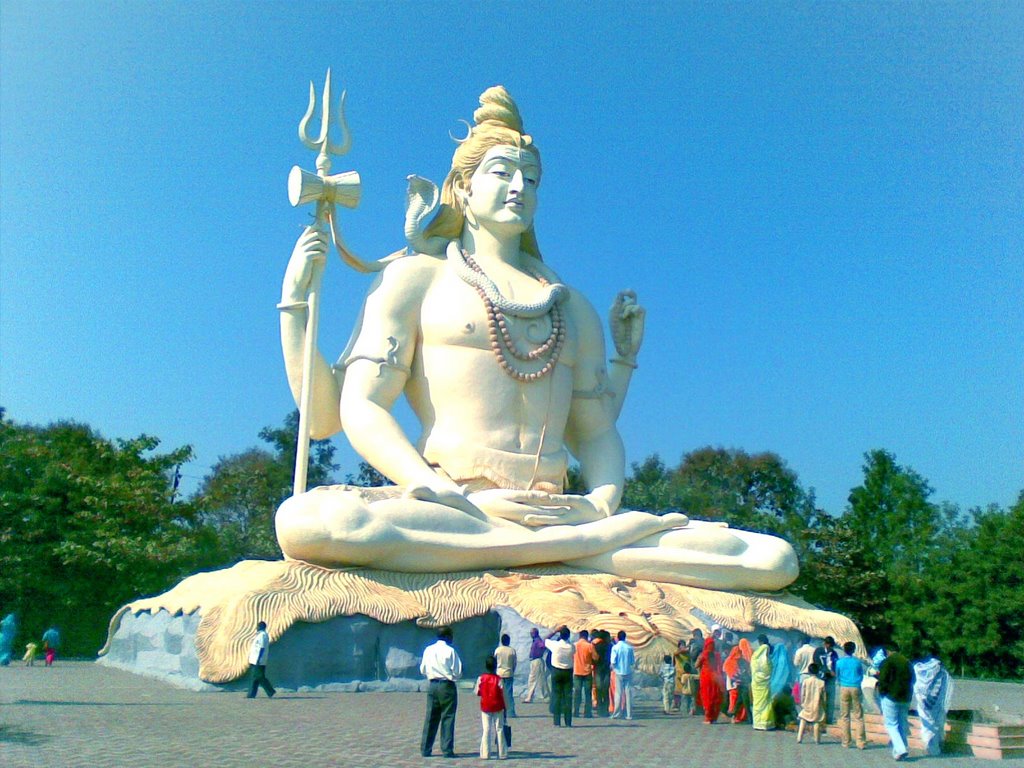 Kachnar City is the favorite place for devotees of Lord Shiva. The statue of lord shiva is built 76ft high under the sky. There are also replicas of 12 Jyotirlinga of lord shiva. The surroundings add more beauty to this place with lots of greenery. The perfect lighting makes it more attractive at night. And if you are visiting this place on “shiva ratri”, there are many possibilities that you may not get a place to stand because almost every Shiva devotee visits this place on that day.

Pisanhari Jain Temple is situated at a distance of 7 Km from the heart of the Jabalpur city on the Jabalpur-Nagpur road. It was built during the nineteenth century on the top of a 300 ft. high hill. There are many small Jain temples here. And also this place is one of the atishay kshetra( Place of miracle). This place feels like a small trek and the beautiful view from the top adds more beauty to it. It is said that the construction of this place was started by the hard-earned money of an old woman who collected it by grinding flours. So this place is also a symbol of faith and dedication. 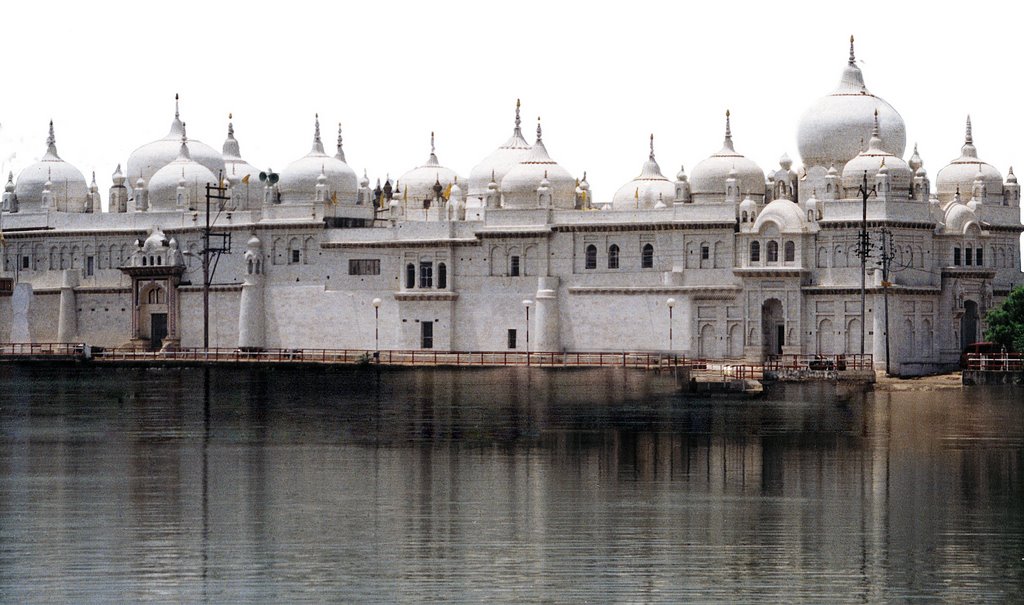 This temple located right on the edge of hanumantal is a historic temple. It has beautiful architecture like a palace with Shikhar and domb. This is also one of the Atishay ksetra(Place of miracle). This temple is open for 24 hours. With a recitation of bhaktambar Strotra, one could feel magic in the atmosphere. And a lake in front of the temple provides a beautiful view with the cold breeze. 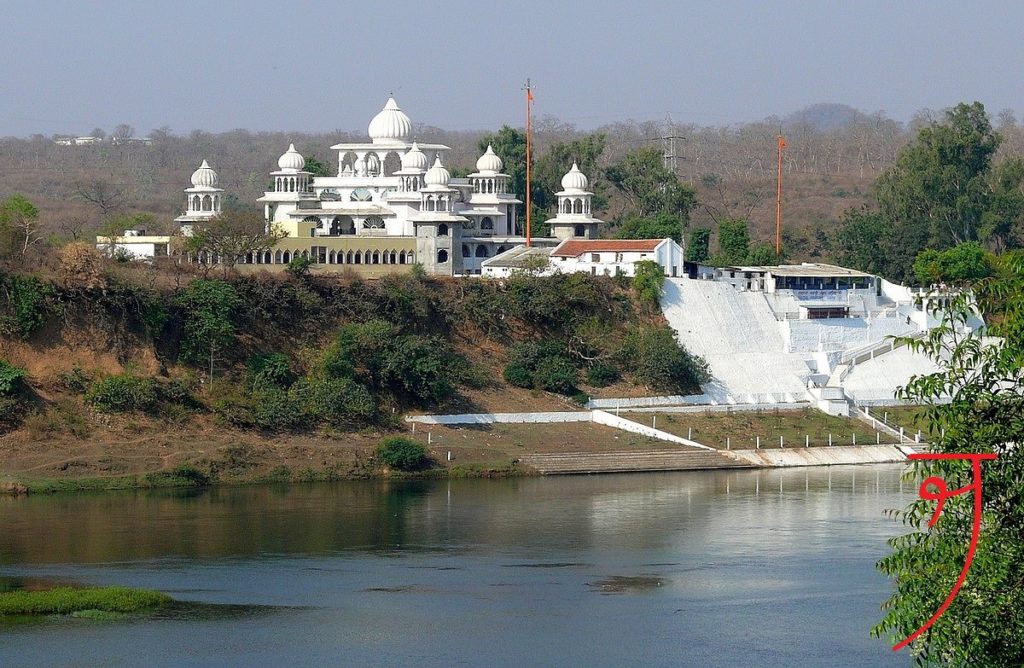 This Gurudwara is located on the side of gwarighat. One can reach there by boat easily. This gurudwara is a must-go for all Jabalpuriyas and visitors. There is a feeling of eternal peace and a beautiful view of the river Narmada. Langar is served every day which generally includes chapatti and cooked vegetables. 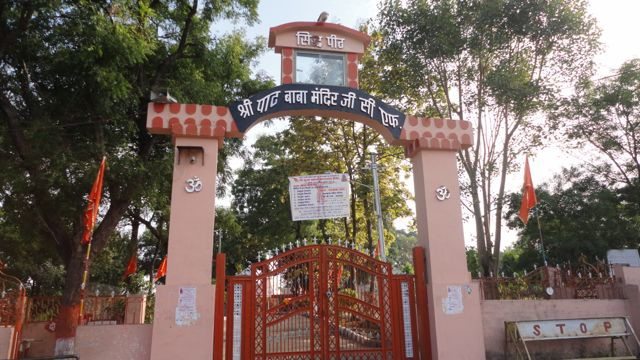 It is believed that the Paat Baba Mandir Jabalpur temple was built during the end of the 19th century when the 2nd industrial revolution started the concept of mass production. During that time, Lieutenant Colonel Stanley Smith was given the orders for establishing a Guns and Carriage Factory at Jabalpur. One night, Smith saw a dream of an ancient idol of lord hanuman buried in the ground where the factory was being built.

He gave orders to the builders to dig out the ground and after a massive search, an idol of lord hanuman was found. Now, not only the factory workers but many people visit here. There is a Yagya hall and a temple of Shree Pateshwar Mahadev. It is said that if you make a wish with a good heart here, it will come true. The temple is surrounded by greenery and is cleaned regularly by the temple people. 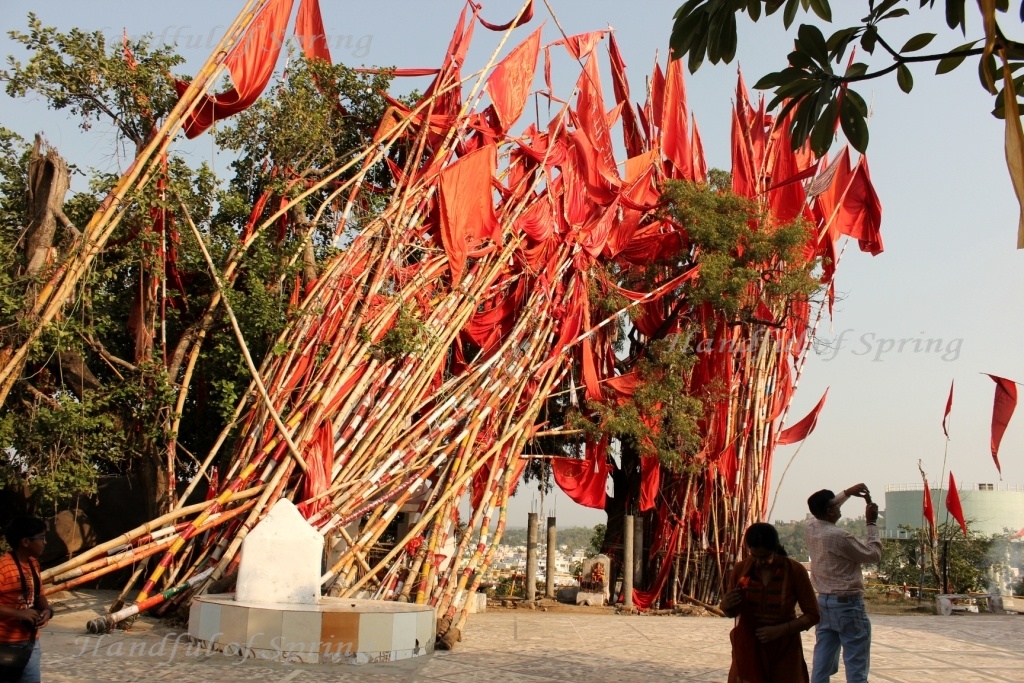 This temple, located on the hills of Madan Mahal, is an ancient temple. It was constructed by the gond rulers. Here, a fair is organized on Monday during the month of Shravan. Thousands of devotees come here carrying a flag which they put at the feet of goddesses. The fair has stalls selling balloons and toys, swings ride, and much more. While coming down from this temple, there is a balance rock which is a great place of attraction. 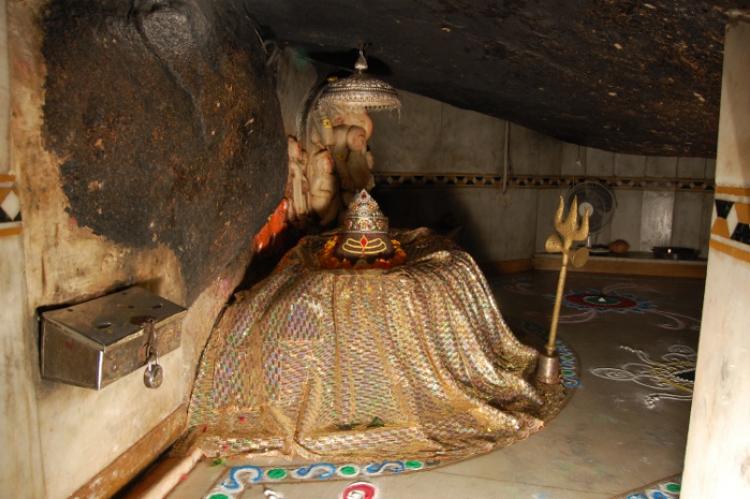 This is another holy place for Shiva devotees. It is believed to exist during the Ramayana period during the venture of Bhagwan Ram, Mata Sita, and Laxman to the Chitrakoot region. As Mata Sita wanted to worship Ma Narmada, Shri Ram offered a chunri to Maa Narmada and made a shiv-ling out of the sand and worshipped it. Though the temple was hidden for a long time and was discovered in 1890. Being built in the cave, this temple does not have a fascinating structure or something but only a small shivling which have millions of feeling and belief of people.

This temple, situated at Ratan Nagar road, is an old and unique temple. There is a unique idol of Lord Ganesh which is believed to have grown gradually. People come here with a clean heart and get magnified seeing the idol. The atmosphere is spiritual with people offering flowers to Lord Ganesha. 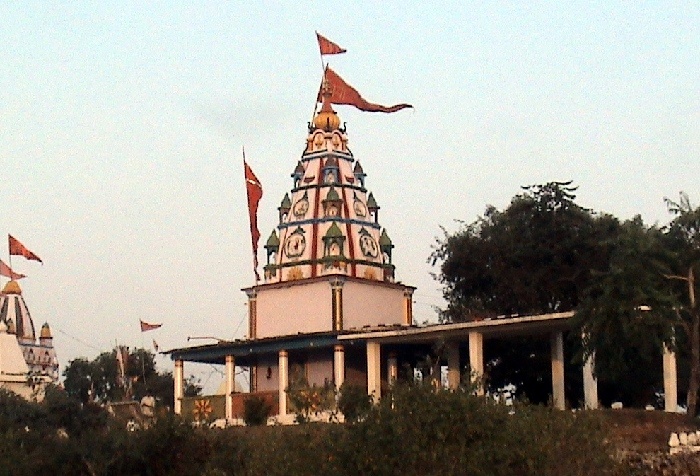 This temple is situated on a hill, receives an immense crowd during the days of Navratri. People gather here to worship Devi Sharda. The temple is small with simple architecture and a stunning aura. Everyone who comes here has faith in the power of Mata Sharda and bows down to her feet.

Q.1 Which is famous in Jabalpur?

Jabalpur is not only famous for its Marble Rocks and scenic charms but also as an industrial city of chowks (markets). It serves usefully as a launchpad for Madhya Pradesh’s famous tiger parks: Kanha, Bandhavgarh, and Pench.

Q2. Is Jabalpur a good city?

Cradled on the banks of the holy river Narmada, Jabalpur stands among the prominent cities of Central India. A scuttling city known for its flourishing industries and historical importance, Jabalpur has it all to leave you in awe of this place.

Q3. Is Jabalpur worth visiting?

Known as the cultural capital of Madhya Pradesh, Jabalpur is one of the most important as well as developed cities in Madhya Pradesh. From the quiet waters of river Narmada to the 100 feet tall astonishing marble mountains, Jabalpur can surely fulfill the demands of any wanderer. But that’s not it!

Q4. What is special in Jabalpur?

Jabalpur is one of the most important cities of Madhya Pradesh and is also known as the cultural capital of the state. The city is famous for major tourist attractions such as Dhuandhar Falls, Bhedaghat, and Chausat Yogini Temple along with the festival of Navratri and Dusshera.

There’s always a time in our life when we look for a vacation to seek blessings of God, console our depressed souls and find the strength to face all the challenges. And trust me this once-in-a-lifetime experience can be rejuvenating and it may change the course of your life.

So, If you’re spiritually inclined and seeking a tour to reconnect with God, and fill your mind with positivity, then Madhya Pradesh is a must-visit place for you. Bestowed with the shaktipeethas (holy places of cosmic power) and jyotirlingas (devotional objects representing the Supreme God Shiva), the state is blessed by both Shiva and Shakti.

There are oodles of shrines in Madhya Pradesh, and these are supposed to be the places where the divinities are believed to have descended. Most of the temples in Madhya Pradesh have grand architecture and unique stories to tell.

Chausat Yogini Temple is the most renowned temple of Jabalpur. Located idyllically on a hilltop you need to climb a long flight of stairs and this pain is worth it as the sight of the Narmada from atop is magnificent. Build in the 10th century, this temple was built during the rule of the Kalchuri Dynasty and has some very notable images of Goddess Durga, to whom this temple is devoted. Checkout more Temples in Jabalpur

You should notice the artistic carvings and intricate stone idols that are the prime attraction of this temple. Well besides these there is also an interesting legend associated with this temple that claims that there is an underground path that leads to the palace of Queen Durgavati’s palace. Come and see if you can hunt the way.

Another famous temple is the Tripur Sundari Temple in Jabalpur that is located at a distance of 12 km from the main city. This is not all, there is also a celebrated Jain temple, Pisanhari ki Madiya that is located near the Netaji Subhash Chandra Bose Medical College near a hill. This temple was the result of the dedication and service of a poor woman who embarked upon the construction of these clump Jain temples in Jabalpur 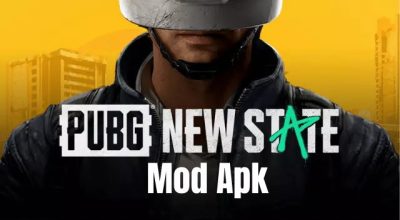 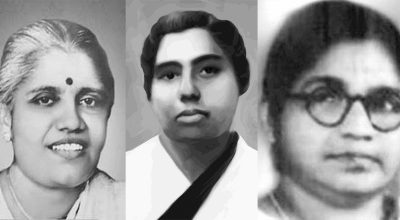