What Is Agnipath Scheme? Full Details of the Agneepath Scheme

The Union Cabinet on 14 June had approved a recruitment scheme for Indian youth to serve in the Armed Forces. The scheme is called AGNEEPATH and the youth selected under this scheme will be known as Agniveers.

AGNEEPATH allows patriotic and motivated youth to serve in the Armed Forces for four years.

According to the government, the AGNEEPATH scheme has been designed to enable a youthful profile of the Armed Forces. It will provide an opportunity to the youth who may be keen to don the uniform by attracting young talent from the society who are more in tune with contemporary technological trends and plow back skilled, disciplined and motivated manpower into the society.

As for the Armed Forces, it will enhance the youthful profile of the Armed Forces and provide a fresh lease of “‘Josh’ and ‘Jazba’” whilst at the same time bringing about a transformational shift towards a more tech-savvy Armed Forces – which is indeed the need of the hour. It is envisaged that the average age profile of the Indian Armed forces would come down by about 4-5 years by the implementation of this scheme.

According to the government, the nation stands to immensely benefit from an infusion of highly inspired youth with a deeper understanding of self-discipline, diligence, and focus that would be adequately skilled and will be able to contribute to other sectors. The dividends of short military service to the nation, society, and the youth of the nation are immense.

Agnipath Scheme (also spelled Agneepath Scheme) (Hindi: Agnīpath Yojanā, transl: Fire-Path Scheme) is a new scheme introduced by the Government of India on 14 June 2022, for the recruitment of soldiers below the rank of commissioned officers into the three services of the armed forces.

The Agnipath Scheme will be the only route for recruitment into the military. All recruits will be hired only for four years. Personnel recruited under this system are to be called Agniveers (transl: Fire-Warriors), which will be a new military rank. The introduction of the scheme has been criticized for lack of consultation and public debate. The scheme is scheduled to be implemented in September 2022.

The youth joining the armed forces under the Agnipath scheme will be known as Agniveers.

Agniveers will be given an attractive customized monthly package along with Risk and Hardship allowances as applicable in the three services. On completion of the engagement period of four years, Agniveers will be paid a one-time ‘SevaNidhi’ package which shall comprise their contribution including accrued interest thereon and matching contribution from the Government equal to the accumulated amount of their contribution including interest as indicated below:

The “Seva Nidhi” will be exempt from Income Tax. There shall be no entitlement to gratuity and pensionary benefits. Agniveers will be provided a non-contributory Life Insurance Cover of Rs 48 lakh for the duration of their engagement period in the Indian Armed Forces.

During this period of service to the nation, the Agniveers will be imparted with various military skills and experience, discipline, physical fitness, leadership qualities, courage, and patriotism.

Post this stint of four years, the Agniveers will be infused into the civil society where they can contribute immensely to the nation-building process. The skills gained by each Agniveer will be recognized in a certificate to form part of his unique resume.

Agniveers, on completion of the four-year tenure in the prime of their youth, will be mature and self-disciplined with the realization to become a better version of himself/herself both professionally as also personally.

The avenues and opportunities that will open up for their progress in the civil world after Agniveer’s tenure would certainly be a big plus for nation-building. 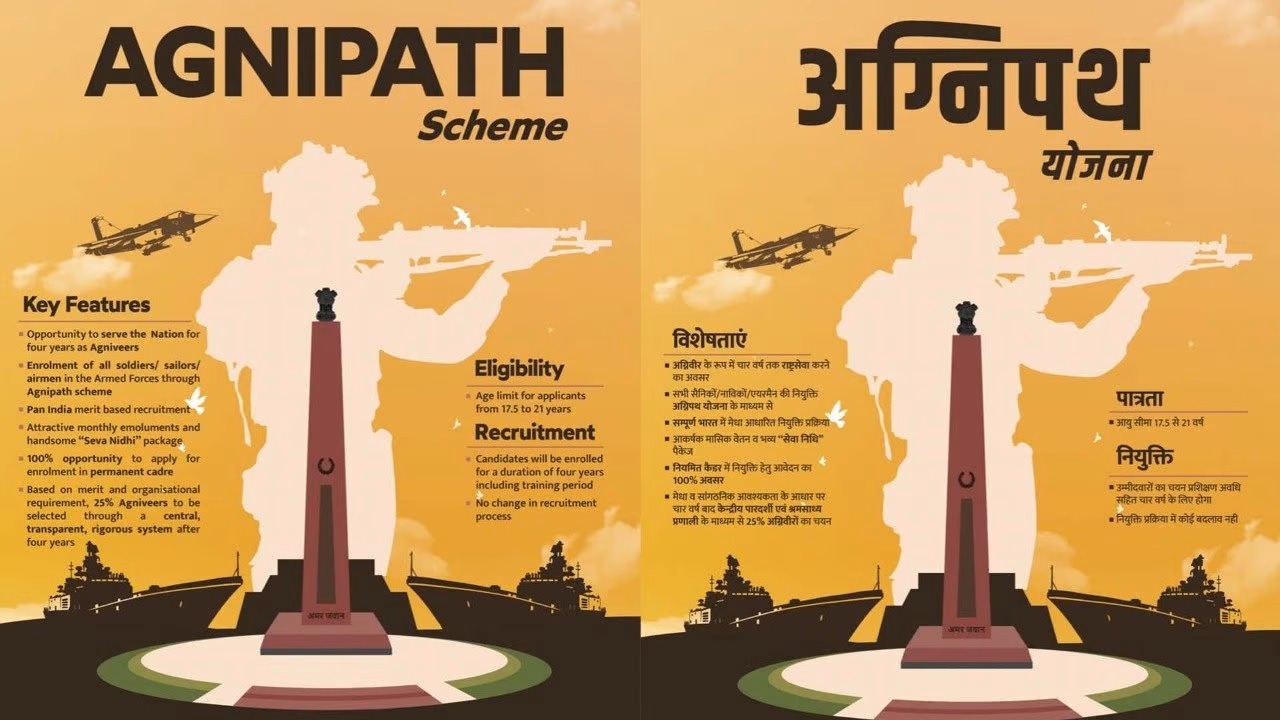 The ‘Seva Nidhi’ of approximately Rs 11.71 lakh would aid the Agniveer to pursue his/her future dreams without the financial pressure, which is normally the case for young people from the financially deprived strata of society.

The individuals, selected for enrolment in the Armed Forces as regular cadre, would be required to serve for a further engagement period of a minimum of 15 years and would be governed by the existing terms and conditions of service of Junior Commissioned Officers/Other Ranks in Indian Army and their equivalent in Indian Navy and Indian Air Force and that of Non-Combatant enrolled in the Indian Air Force, as amended from time-to-time.

The Agnipath scheme was approved by the Indian Government in June 2022 to be implemented in September 2022. The announcement was done on June 14, 2022. The scheme is for both male and female aspirants in the age group 17.5 to 21 years.

Amid widespread protests against the Agnipath scheme, the Central Government raised the upper limit from 21 to 23, but only for recruitment in the year 2022. The recruitment through this scheme is twice a year for the Indian Army, the Indian Navy, and the Indian Air Force.

The posts available are below the officer cadre. The Agnipath Scheme is the only route to serve in the military.

The recruits named Agniveers serve for a tenure of four years which includes training for six months followed by 3.5 years of deployment. After retirement from the service, they will have the opportunity to apply to continue in the armed forces. Not more than 25 percent of the total strength of the retiring batch will be selected for the permanent cadre.

Personnel who retire after 4 years of service will not be eligible for a pension but will receive a lump sum amount of approximately ₹11.71 lakh at the end of tenure. The Indian government plans to recruit 45,000 to 50,000 new personnel every year through this scheme. In September 2022, 46,000 youngsters are planned to be recruited through the scheme.

Under the AGNIPATH scheme, the Agniveers will be enrolled in the Forces under respective Service Acts for four years. They would form a distinct rank in the Armed Forces, different from any other existing ranks.

Upon the completion of four years of service, based on organizational requirements and policies promulgated by the Armed Forces from time to time, Agniveers will be offered an opportunity to apply for permanent enrolment in the Armed Forces.

These applications will be considered in a centralized manner based on objective criteria including performance during their four-year engagement period. Up to 25% of each batch of Agniveers will be enrolled in the regular cadre of the Armed Forces. Detailed guidelines will be issued separately.

The selection will be the exclusive jurisdiction of the Armed Forces. 46,000 Agniveers will be recruited this year.

Enrolment will be undertaken through an online centralised system for all three services with specialized rallies and campus interviews from recognized technical institutes such as Industrial Training Institutes and National Skills Qualifications Framework, among others.

Enrolment will be based on an ‘All India All Class’ basis and the eligible age will be in the range from 17.5 to 21 years. Agniveers will meet the medical eligibility conditions laid down for enrolment in the armed forces as applicable to respective categories/trades.